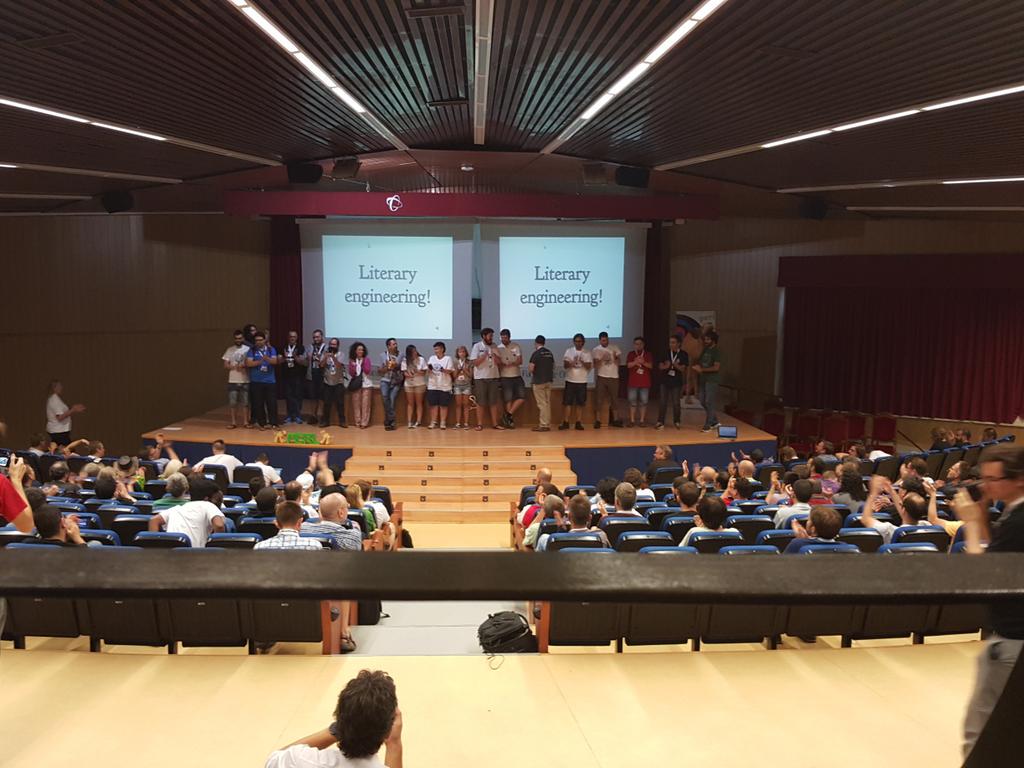 I’m in Granada, Spain for the 2015 “Yet Another Perl Conference” (YAPC). The three-day conference finished about an hour and a half ago and, rather than going to a bar with dozens of other attendees, I thought I would try to get my impressions down while it’s all still fresh in my mind.

YAPC is a grass-roots conference. It’s specifically planned so that it will be relatively cheap for attendees. This year I think the cost for an attendee was 100 EUR (I’m not sure as I was a speaker and therefore didn’t need to buy a ticket). That’s impressively low cost for such an impressive conference. Each year since 2000 (when the first European YAPC took place in London) 250 to 300 Perl programmers gather for their annual conference in a different European city.

Although the conference started on Wednesday, there were a few tutorials over the two days before that. On Tuesday I ran a one-day course on DBIx::Class, Perl’s de facto standard ORM. There were slightly fewer students than I would have liked, but they were an enthusiastic and engaged group.

The night before the conference was the traditional pre-conference meet-up. People generally arrive during the day before the conference starts and the local organisers designate a bar for us all to meet in. This year, Eligo (a recruitment company with a strong interest in placing Perl programmers) had arranged to buy pizza and beer for all of the attendees at the conference venue and we spent a pleasant evening catching up with old friends.

I should point out that I’m only going to talk about talks that I saw. There were four tracks at the conference which meant that most of the time I was having to make difficult choices about which talk to see. Other people blogging about the conference will, no doubt, have a different set of talks to discuss.

The conference had a keynote at the start and end of each day. They all sounded interesting, but I was particularly interested in hearing Tara Andrews who opened the first day. Tara works in digital humanities. In particular, she uses Perl programs which track differences between copies of obscure medieval manuscripts. It’s a million miles from what you usually expect Perl programmers to be doing and nicely illustrates the breadth of Perl’s usage.

I saw many other interesting talks during the day. The one that stood out for me was Jose Luis Martinez talking about Paws. Paws wants to be the “official” Perl SDK for all of Amazons Web Services. If you know how many different services AWS provides, then you’ll realise that this is an impressive goal – but it sounds like they’re very nearly there.

Lunch was run on an interesting model. Granada is apparently the only remaining place in Spain where you still get served tapas whenever you order a drink in a bar. So when you registered for the conference, you were given some tokens that could be exchanged for a drink and tapas at ten local bars. It was a great way to experience a Granada tradition and it neatly avoided the huge queues that you often get with more traditional conference catering.

At the end of the day, everyone is back in the largest room for the lightning talks. These talks are only five minutes long – which makes them a good way for new speakers to try public speaking without having to commit for a longer talk. They are also often used by more experienced speakers to let their hair down a bit and do something not entirely serious. This session was the usual mixture of talks, which included me giving a talk gently ribbing people who don’t keep their Perl programming knowledge up to date.

The final session of the day was another keynote. Curtis Poe talked about turning points in the story of Perl and the Perl community. Two points that he made really struck home to me (both coming out the venerable age of Perl) – firstly Perl is language that is “Battle-Tested” and that isn’t going anywhere soon; and secondly the Perl community has really matured over the last few years and is now a big part of Perl’s attraction. This last point was apparently reiterated in a recent Gartner report on the relative merits of various programming languages.

Wednesday evening saw an excuse for more socialising with the official conference dinner. This was a buffet affair with around the swimming pool of a swanky Granada hotel. Conference attendees paid nothing for this event and the food and drink was still flowing freely when I slunk off back to my hotel room.

Thursday morning started with another Perl community tradition – the “State of the Velocirapter” talk. This is an annual talk that focusses on the Perl 5 community and its achievements (in comparison with Larry Wall’s “State of the Onion” talk which generally concentrates on the Perl 6 project). This year, Matt Trout has handed over responsibility for this talk to Sawyer, who was in a more reflective mood than Matt has often been. Like Curtis, the previous evening, Sawyer has noticed how the Perl community has matured and has reached the conclusion that many of us love coming to YAPC because the community feels like our home.

Next up was Jessica Rose talking about The Cult of Expertise. This was less a talk and more a guided discussion about how people become recognised as experts and whether that designation is useful or harmful in the tech industry. It was a wide-ranging discussion, covering things like imposter syndrome and the Dunning-Kruger effect. It was rather a departure for such a technical conference and I think it was a very successful experiment.

The next talk was very interesting too. As I said above, the European YAPC has 250 to 300 attendees each year. But in Japan, they run a similar conference which, this year, had over 2,000 attendees. Daisuke Maki talked about how he organised a conference of that size. A lot of what he said could be very useful for future conference organisers.

After lunch was the one session where I had no choice. I gave my talk on “Conference Driven Publishing” during the second slot. It wasn’t at all technical but I think I got some people interested in my ideas of people writing their own Perl books and publishing them as ebooks.

At the end of the day, we had another excellent session of lightning talks and another keynote – this time from Xavier Noria, a former member of the Perl community who switched to writing Ruby several years ago. He therefore had an interesting perspective on the Perl community and was happy to tell us about some of Perl’s features that fundamentally shaped how he thought about software.

There was still one more session that took us well into the evening. There is a worry that we aren’t getting many new young programmers into the Perl community, so Andrew Solomon of GeekUni organised a panel discussion on how to grow the community. A lot of ideas were shared, but I’m not sure that any concrete plans came out of it.

And so to the final day. The conference started early with a keynote by Stevan Little. The theme of the conference was “Art and Engineering” and Stevan studied art at college rather than computer science, so he talked about art history and artistic techniques and drew some interesting comparisons with the work of software development. In the end he concluded that code wasn’t art. I’m not sure that I agree.

I then saw talks on many different topics – and example of a simple automation program written in Perl 6, a beginners guide to who’s who and what’s what in the Perl community, an introduction to running Perl on Android, a couple of talks on different aspects of running Perl training courses, one on the Perl recruitment market and one on a simple git-driven tool for checking that you haven’t made a library far slower when you add features. All in all, a pretty standard selection of topics for a day at YAPC.

The final keynote was from Larry Wall, the man who created Perl in 1987 and who has been steering the Perl 6 project for the last fifteen years. This was likely to include some big news. At FOSDEM in February, Larry announced his intention to release a beta test version of Perl 6 on his birthday (27 September) and version 1.0 (well, 6.0, I suppose) by Christmas. There were some caveats as there were three major pieces of work that were still needed.

Larry’s talk compared Perl 5 and Perl 6 with The Hobbit and The Lord of the Rings respectively – apparently Tolkien also spent 15 years working on The Lord of the Rings – but finished by announcing that the work on the three blockers was all pretty much finished so it sounds like we really can expect Perl 6 by Christmas. That will be a cause for much celebration in the Perl community.

After Larry, there was a final session of lightning talks (including a really funny one that was a reaction to my lightning talk on the first day) and then it only remained to give all of the organisers and helpers a standing ovation to thank them for another fabulous YAPC.

Next year’s conference will be in Cluj-Napoca. I’m already looking forward to it. Why not join us there?