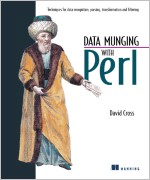 Many years ago, I wrote a book called Data Munging with Perl. People were kind enough to say nice things about it. A few people bought copies. I made a bit of money.

Recently I re-read it. I thought that some of it was still pretty good. There were some bits, particularly in the early chapters, that talked about general principles that are still as relevant as they were when the book was published.

There were other bits that haven’t aged quite as well. The bits where I talk about particular CPAN modules are all a bit embarrassing as Perl fashions change and newer, better modules are released. Although it was still available from Amazon, I really didn’t want people paying for it as a lot of it was really out of date.

But today I got an interesting letter from the publishers, telling me that they have taken the book out of print. And that all  the rights in the book have reverted to me. Which means that I can now distribute it in any way that I like. And people don’t have to pay a lot of money for a rather out of date book.

So, you can download a PDF of the book from http://perlhacks.com/dmp.pdf. Or I’ve embedded the book below.

I might even have the original documents somewhere. So if I get some spare time I might be able to produce a more reasonable ebook version (but don’t hold your breath!)

Let me know if you find it useful.