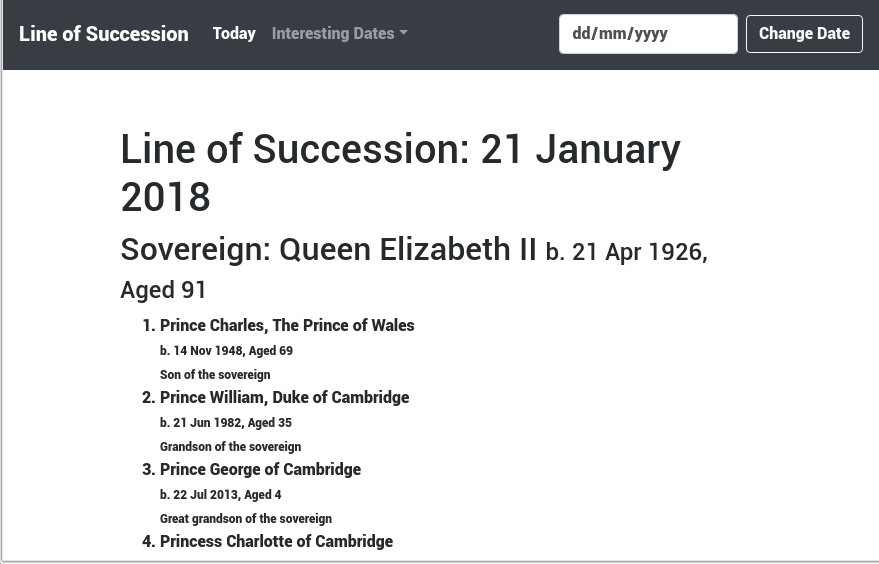 I’m a republican. No… wait… come back! That’s not what I mean.

I’m a long way from being a supporter of the Republican Party. I mean “republican” in its older meaning of “someone who thinks their country should be a republic. That is to say, I’m not a big fan of the British royal family.

But while I believe that the UK should get rid of the royal family, I’m also fascinated by them. In particular, I’m fascinated by the laws that determine the line of succession – that is the list of people in line to take over the throne.

When I was a child I believed that the line of succession was a big list that had every British person’s name on it and that it would only take a single catastrophic event to propel my name to the top of that list. Later on I discovered the Act of Settlement (1701), which is the law which actually defines the line of succession (modulo a few later tweaks). I was disappointed to find that there were only a few thousand people on the list (and that didn’t include me!) and also that a lot of the people on the list weren’t British (largely due to Queen Victoria’s children marrying royalty from all over Europe).

A few months ago, I started to think about building a web site that would allow people to explore the line of succession through time. And over the last few weeks, I have build the site. It’s at lineofsuccession.co.uk. On the main page, you will see the current line of succession. And in the navigation bar is a drop-down menu that allows you to move to a few interesting data (the days that the last four monarchs came to the throne) and a date picker allowing you to choose any random date.

The code is, of course, on Github. The web app is a pretty standard Dancer2 application which really doesn’t do anything clever. Most of the complexity in an application like this is in the data gathering.

Currently I have just over a hundred people in the database. That’s most of the descendants of Edward VII (there a few lines that I haven’t completely filled out yet), but eventually I want to go back to all include all of the descendants of Electress Sophia (the person who the crown was “settled on” in the Act of Settlement). I’ve heard estimates that she has somewhere between 5-6,000 descendants. So I have a bit of work to do there!

Other than more people, I have a few other things I’d like to add to the site:

Anyway, there’s my current itch scratched. And, as in so many cases, it’s just given me more itches. But please let me know if you find the site at all interesting or useful.